Every few years the art scene of Bergen shuffles the deck, and in strangely synchronous waves, one set of players leaves and another comes in. In the spring of 2018, the institutional landscape is new again, with new directors at Hordaland Kunstsenter (HKS), Bergen Kunsthall and KODE. It is significant that this shift is accompanied by major changes in the administration of Bergen Kommune’s cultural department the inauguration of a Bergen Kommune’s new ten-year Kunstplan (2018-2027), a document that places the artist at the centre of an “internationally-oriented cultural life” (“et internasjonalt orientert kulturliv”). As progressive as this is on the part of the city, one can’t help but wonder how robust artistic thought really is in the midst of political mandates?

Early 2018 saw the launch of three new and independent artist-run galleries in Bergen, all of which claim to be artist-centred (rather than, say, curator- or audience-centred). These three newcomers are Palmera (written “p a l m e r a”), run by Tatiana Lozano, Slakt, recently opened by Numi Thorvarsson, and Aldea, a studio collective, workshop and gallery founded by Cameron MacLeod and Magnhild Øen Nordahl. They are the latest in a lineage of spaces started by artists that have eventually “professionalised” – a term that was euphemistically used by the board of HKS in the early 2000s to describe the decision to hire a curator as a director.

Like HKS in 1976, Bergen Kunsthall was in 1839 started as a members’ association that functioned to increase local and international visibility for its artist-members. Today the Kunsthall is an essential curatorial platform in Bergen, rather than a place for artistic experimentation.

Precariousness as an asset

Unlike a museum or a public institution, the time of an artist-run platform is always now, the labour mostly free and fast. Programming is often improvised, and financing typically involves personal credit cards. The independence that this precariousness allows is fortunately recognised as an asset within Bergen’s cultural scene, and so it is not difficult for artist-run spaces to attract a kind of “drip-feed” support from the municipality: just enough to cover the rent until the next application deadline, but not enough for anyone to quit their bar job.

Launched by four friends in Bergen in 2015, Galleri Felt was a textbook example. Its founders were already stalwarts of the Bergen art scene: Hedvig Heggem Nergaard, Espen Iden, Tatiana Lozano and Lasse Arikstad. Rumours churned for about two weeks and then, as if overnight, Felt washed into a tiny corner shopfront just up the hill from Bryggen. They propagated an energy that felt entirely new in slow Bergen. They were putting up new shows just about every week, and on occasion hosting raves in their freezing fifteen square metre basement. They appeared on Bergen Kunsthall’s talks programme at Landmark with Felt Focus, a monthly discussion about photography. They set up an exchange with a similar initiative in Copenhagen, Galleri Kvit. And all of this was subsidised by their various day jobs and some adhoc cushioning from Bergen Kommune and Kulturrådet. It sounds like an impossible course to follow because it is: Felt dissolved at the end of 2017.

The ecology of artist-run spaces is peculiar though, in that it attracts, and depends on, people who just don’t know how to stop. Lozano took over the space from her colleagues and in the beginning of 2018 launched Palmera as a solo initiative. “Palmera would have never existed without Felt’s seed,” Lozano says. “That is why I think of Palmera as a stem born in the space that hosted an amazing initiative I’m really grateful for, with all its ups and downs. I had the seed in my pocket and had the chance to repot it so I did.”

Lozano’s approach to programming Palmera is more moderate than it was in the time of Felt. Her guiding principles are flexibility, openness and being project-responsive, or “listening” to the needs of an artist or a work, as she puts it. In practical terms this manifests as a combination of planning ahead and leaving space in the programme for spontaneous events and collaborations.

The exhibition Kloa by Eremitten, a collaboration by Anders Smebye and Anders Dahl Monsen, is a case in point. I was gently hungover on the Saturday afternoon I shuffled into the gallery, and the smell of cold crab claw hit me like the oar of a rogue rowboat. The centrepiece of the exhibition was a gigantic wooden sculpture that doubled as a tool to crack open crab claws, mounds of which waited in buckets in the back room of the gallery. Visitors were invited to prepare cold crab meat sandwiches using the sliced white bread displayed in piles in the window and the mayonnaise provided in a faux antique, wall-mounted dispenser.

The resonance of Palmera’s current programme with the Fluxus happenings of the 1960s and 1970s might not be a deliberate historical reference, but it is an instructive one. Happenings introduced into art discourse the need to think carefully through context, power and conventions of engagement. Happenings proposed small, specific spatial and social articulations, and in this respect they could be seen as temporary micro-institutions. Perhaps artist-run spaces today perform the same operations, generating discourse before it has a chance to crystalize into doctrine.

By contrast, the premise of Slakt Galleri, a new project started by Numi Thorvarsson on the ground floor of the embattled studio complex Bergen Kjøtt, is precisely to resist discourse. Slakt’s one night only exhibitions are unified by their lack of textual mediation. Thorvarsson, a photographer, insists on the ability of visual artworks to speak for themselves, and is inherently suspicious of the wordy mediation that institutions rely on in order to reach their publics. Introductory texts, captions and titles are all forbidden at Slakt. One can’t help but wonder, though, whether the zero text policy might not in time become a form of discourse in its own right, a limitation rather than a freedom.

The artwork as curator

This said, the notion that artist-run spaces are strictly fly-by-night warrants scrutiny. Aldea, a major development in the old premises of the the Faculty of Art, Music and Design at the University of Bergen, is founded and managed by two artists, Cameron MacLeod and Magnhild Øen Nordahl, but relies heavily on public funding and has an elaborate organisational structure. With a similar model to Platform Stockholm, co-founded by MacLeod in Stockholm in 2010, Aldea consists of rental studios for artists, a bespoke gallery space and – the crown jewel of the operation – fully equipped technical workshops for woodwork, metalwork and digital 3-D construction. Many of the studios are already occupied by local artists, and the workshops and gallery space are scheduled to open during 2018. The gallery programme will be directed not by MacLeod and Nordahl themselves, but by Curatron, the software developed by MacLeod in 2015 to automate curatorial processes.

Curatron replaces the activities of developing a thematic exhibition concept and then selecting artists to work within this framework, with an algorithmically based peer-selection process. It is not simple voting, which some critics have mistaken it for, but a process of collectively filtering for different qualities of consistency. MacLeod sees Curatron as an artwork, one that unseats conventional curatorial authority. According to this logic, Aldea’s gallery is absolutely artist-run, or even artwork-run, and despite its scale, this organisation is as much an artist-run space as Bergen’s tiniest contender in the genre: Gallery Watch, a gallery that existed inside an artist’s wristwatch and had its grand opening on 10 February, with speeches by Bergen Kunsthall’s director Axel Wieder and artist Mårten Spångberg. Subsequently, all evidence of the gallery and of this event has vanished from the internet.

If the question of artist-run identity is merely a question of scale, then the distinction between institutions and artist-run spaces is at base trivial. But this is clearly not an interesting kind of distinction. Aldea’s financial turnover is massive compared with that of Slakt or Palmera, but the stakes for Nordahl and MacLeod are commensurably high. They are personally liable for the rental of several floors of Aldea’s fjord-facing building should their support systems fail them. In this respect they have taken the typical arrangement of bar-job-subsided gallery and blown it up exponentially.

Perhaps instead artist-run-spaces are important precisely because of how they propose alternative ways of making institutions, and of being institutional. By encroaching on this territory, which is seen as the domain of curators, they force us to rethink the relations between artist, curator, the public sector, space and audience. In Palmera-founder Tatiana Lozano’s words, “when you find out that – surprise! – your space is an institution too, no matter the scale, the big question is, how are you going to handle that?”

Woke solo shows and speculative thematic exhibitions characterize the autumn season. Also, one of the region’s oldest biennials is reawakened and rejuvenated. 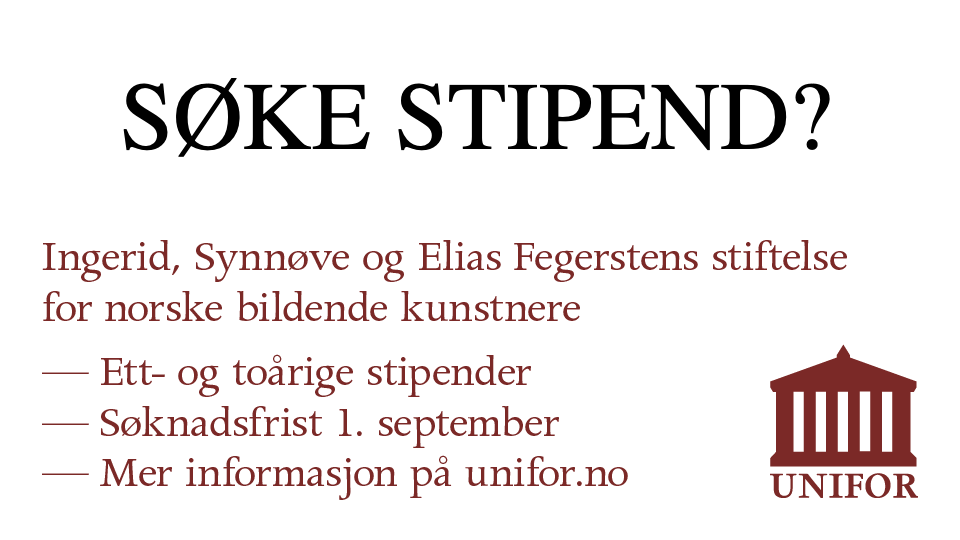